You can create custom parts, workers, scripts, and libraries to extend the LogicNets runtime for LogicNets Version 7.1 or higher. All custom elements should be placed in the parts, workers, scripts, and library folders of your company installation. For example, if your company installation is named mycompany and the location of your LogicNets installation is c:\logicnets then the locations for custom elements should be as follows: 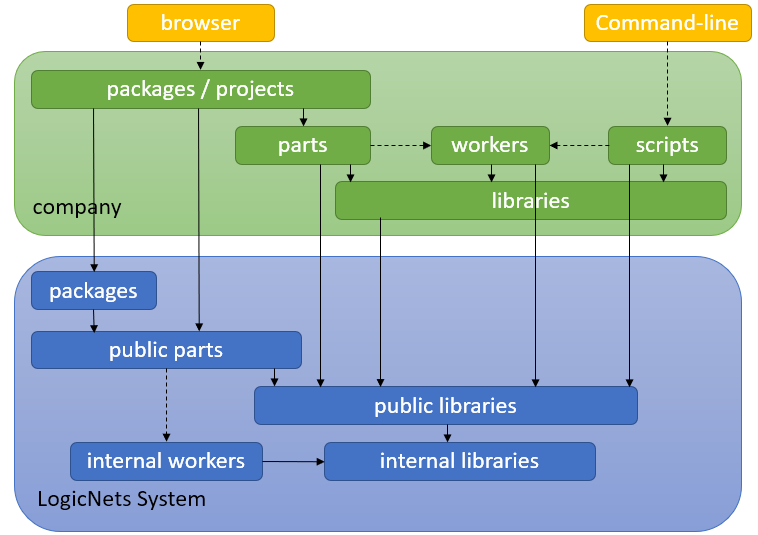 When you have access to the server you can create or edit the custom scripts on the server-side. However, there is also a system application callled CustomFileManager that is available to support online editing. If the CustomFileManager tile is not available on your portal page you can ask your system administrator to configure this via AccessManagement. 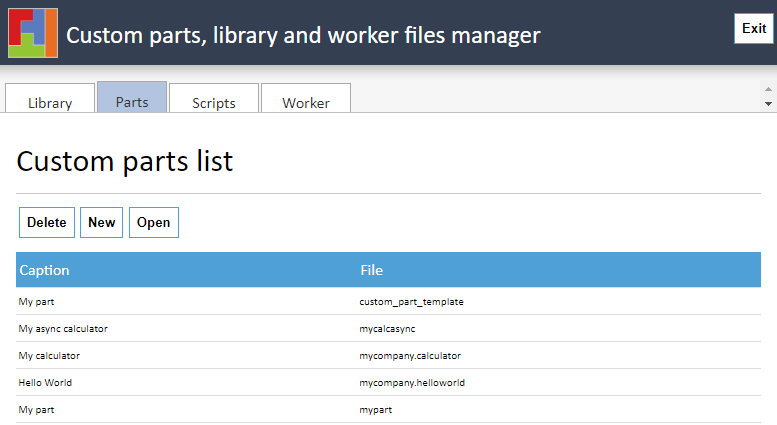 Depending on your purchased licenses, you are able to generate an offline package. The system embeds the custom parts, libs, and workers in the offline package during the publish step. The following example shows the use of a custom lib for a calculator. The part triggers a worker, and the worker uses a lib to calculate. To review this example project upload the  custom.zip custom script into your company folder and then import the CustomOfflineTest.zip example project in your workspace.

Note: It is not possible to run commandline custom scripts in offline mode, because the LogicNets commandline execution tool, called Blue, is not available.

The system can only access custom parts from the package, project, and logicnets that are located in the same company installation. Choosing the right name of a part is important, since the runtime will first look in the system part folders for a part before looking in the custom-part folder. The system will therefore never use a custom part with the same name as a system part. Be aware of the following naming and use conventions for custom parts:


Download the custom_part_template.lua custom-part template as starting point for developing a custom part.

The runtime uses the part meta-definition to generate a part editor in the Designer. But the system also uses it to validate all parameters set in logicnet models and to generate a data model for the project, so it is an important piece of the part script. The meta-definition contains a collection of tab definitions, and every element (tab definition) will result in a separate tab in the part editor in the Designer. The caption field is the caption of that specified tab. Items is a collection of field definitions where each field is one-part parameter. Different types of part parameters are supported: data-object (for inputs and outputs), text-input, number-input, and dropdown.

Every part has specific parameter settings:

You can use custom (command-line) scripts to run scripts from the OS command line; e.g. as part of the Windows Scheduler or as a post-installation script. However, custom scripts can only be started when you have access to the server itself; e.g. ‘c:\logicnets\system\bin\blue.exe custom [companyname] [scriptname] <[parameters]>', c:\logicnets\system\bin\blue.exe custom demo customscript 3 2 *'.

You can use custom worker scripts to run lengthy scripts, and they are executed in their own process. Worker processes can be started from a custom part, custom library, or custom command-line script. The custom script that started the worker process can retrieve the result of the worker process or the in-between status.

The API documentation is part of the designer package and can be accessed via the help link on the server-side script part. You can also update it directly via this URL:
[[your host]]/packages/designer/documents/scriptapi.html.

Since Lua is a scripting language that does not include strict type checking, you should follow general rules/guidelines to avoid problems: