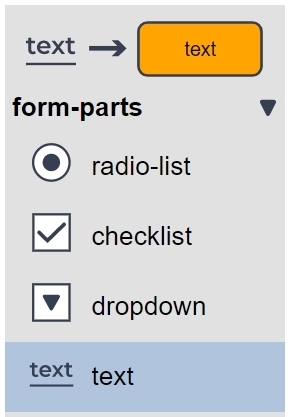 There are several ways to add a node to a logicnet.

To add a new node from the toolbox simply click on the node type you want to add.  For each category of node, the last selected node is shown as a clickable icon. Or click on the expander and make your selection from the list.

The system adds the node to the Viewer, but the node is not attached to your logicnet.

Add a Node into the Logicnet Flow

If you first select an existing node from the logicnet,  the system outlines it in blue and displays the label in bold type. Clicking on a node icon in the Toolbox now and the system will add the node into the logicnet, just after the selected node.

Note: when the system adds the node it automatically opens the editor for that node on the right side of the screen.

The Designer contains drag-and-drop functionality for nodes and you can add a node by dragging it from the Nodes Toolbox onto your Viewer. Simply locate the node type you want from the Toolbox, click and hold on it, and drag it onto an open spot on your Viewer. If you drop your node on the start node the system will make the dragged node the first node in your logicnet. The system connects the nodes together and opens the editor for your dragged node.

When inserting a rule into a pathway in Release 7.4 on, both the TRUE and FALSE legs are connected to the next node by default.
To complete the logic step you should do one of the following: